Welcome aboard a Skype session with PBIA!

Mar 19, 2020 Alina Dumitru Articles
Lucas Bacariza and our tutor Avery had such a great Skype lesson on the defeat of the Spanish Armada in 1588. Since Lucas is from Spain and knew a lot about it, he came up with 5 fun facts to share with her as the “teacher” for the day.
To make this more fun they also wore their Captain hats during their Skype lesson! Making online learning personal and interesting at it’s finest Captains! 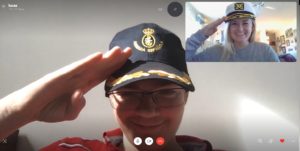 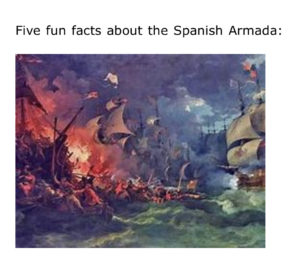 Here are 5 fun facts about the Spanish Armada:
1. In 1588, The Spanish Armada lost 130 wooden ships to a storm, to reefs, and by the time the remaining fleet came upon the shores of Britain, to the British Navy, and the entire fleet was destroyed.
2. The King of Spain, Philipp II, assigned the Duke of Medina Sidonia to control the fleet just three days after Marquis Santa Cruz died. He was a general on land, not on the sea, so he did not know what he was doing.
3. The English had Sir Francis Drake to control their fleet. When he heard about the planned Spanish attack, he was playing a game of bowling with his friends and insisted that he had time to finish the game and defeat the Spanish Armada.
4. Queen Elizabeth I’s Royal British Navy had 55 ships, but their ships were bigger and were able to carry more guns. The Spanish only had short-range cannons, while the English had long-range cannons.
5. To celebrate the victory over Spain, a commemorative coin was given out to people in London that shows the battle in detail, including Spanish sailors jumping overboard.

A Tutor’s Perspective with Debby Laznik

May 13, 2020 Alina Dumitru Articles
Debby has started making custom fabric masks for customers all over the US. She also started donating them to frontline workers, such as nurses, postal clerks, and sanitation workers. There is a real need ...

A Tutors’ Perspective with Matt Sacks

May 10, 2020 Alina Dumitru Articles
Unfortunately the news and our lives have been dominated by coverage of the Covid-19 virus.  Yet, with this unprecedented situation has come some unforeseen educational opportunities for our students.  I have been covering geography ...